To create various home network trouble conditions I disconnected the Ethernet cable from Wi-Fi router to cable modem which killed my Internet access. The family noticed immediately when I interrupted their Netflix movie and Internet surfing! They’ll get over it, maybe the kids will go outside. This network diagram illustrates the network problem:

I plugged the LinkSprinter into the Ethernet switch port and ran the network tests while viewing the test progress in real-time on my iPhone via the LinkSprinter Wi-Fi connection. Sure enough, the Internet connectivity test failed with the red Cloud LED:

After reconnecting the Wi-Fi router to the cable modem, I logged into the Wi-Fi router and disabled the DHCP feature. The DHCP server what assigns an IP address to devices on the Local Area Network (LAN) network, meaning the computers, smart phones, tablets, laptops, gaming consoles, etc. that are connected to the home network either by Ethernet cable or Wi-Fi. Clicking the Retest button on the smartphone web page ran the test. As expected, the LinkSprinter detected the DHCP server error:

Screen capture from my iPhone of DHCP test failure report. I tapped DHCP section to expand the view to show the test details: 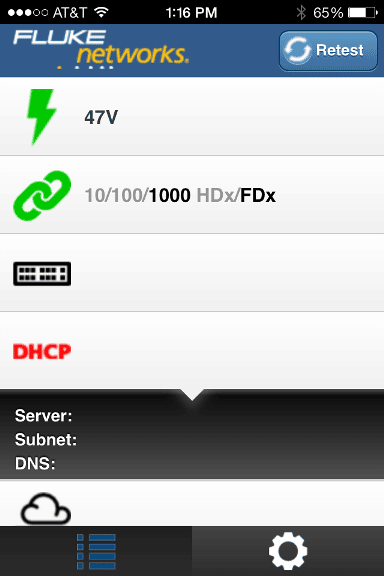 The LinkSprinter is great for testing Ethernet cable drops, identifying the Ethernet switch physical port the cable is connected to and checking Virtual LAN (VLAN) assignments. Most Business IP phones have a pass-through Ethernet data port for connecting a computer in an office environment to minimize the quantity of Ethernet wall jacks and switch ports consumed. For network management and Quality of Service (QoS), voice and data VLANs are configured. The LinkSprinter is a handy tool for the network installer whether the IP phone is served by an on-premise PBX or a Hosted Communications service provider.

I ran two tests on the business voice and data network:

The LinkSprinter 200 returned a wealth of network information, in particular:

This information saves a lot time and guesswork when configuring and troubleshooting networks.

Small business networks are often installed in older buildings in out of the way places such as broom closets like the one in the following photo. This network provides Internet Wi-Fi connectivity and Power over Ethernet (PoE) for IP security cameras. The closet is unheated and it was cold this winter with temperatures down to 4° Fahrenheit (-15° Celsius). The IP camera stopped working and I’m surprised the network gear didn’t completely fail – circuit board solder joints tend to crack due to expansion with the heat and cold.

Internet access was fine via Wi-Fi router, so the problem isn’t with DSL modem or router. Something must be wrong with the Cisco ESW-520-8P PoE switch or the PoE camera.

I unplugged the gray Ethernet patch cable (see the following photo) from the wall jack serving the camera and connected it to the LinkSprinter 200. Viewing the test results via the LinkSprinter Wi-Fi hotspot on my iPhone I saw the problem: Internet connectivity was fine but zero volts on the PoE port: 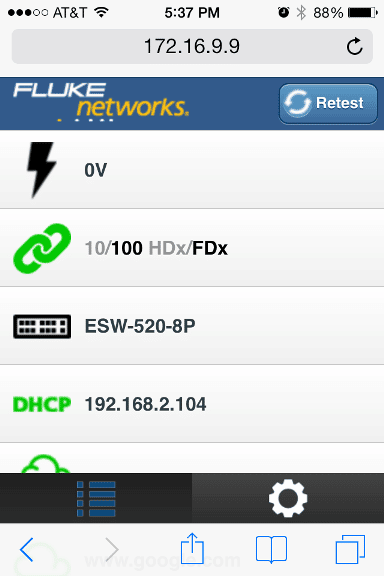 Although the Cisco ESW500 switch does have a PoE LED indicator for each switch port, the LinkSprinter provided independent verification the switch port PoE was bad. Now I need to figure out if it’s a problem with the port or if the entire switch has failed.

I moved the Ethernet patch cable to another port on the Cisco switch and retested. Success! 49 volts PoE:

The PoE camera was back online after moving the cable known good switch port. While this was a simple fix, I wouldn’t have a means to verify PoE voltage without the LinkSprinter 200. Had PoE failed across all switch ports I would’ve been scratching my wondering if the problem was with the patch cable, cable drop, Ethernet switch or camera with no choice but to start swapping cables and equipment.