How to Finish a Basement Bathroom – Part 3

How to Build a Tile Shower Pan

Oately, Inc. has an excellent overview of shower pan construction here and my installation will be identical. The Oatey shower pan video is the best I’ve seen:

If I were to do this over again, I would use pre-formed shower curb and pan products like the Schluter-KERDI-SHOWER-KIT for faster installation and less work. Ask the people at your local tile specialty store for recommendations because the big box home improvement stores often don’t carry these products. 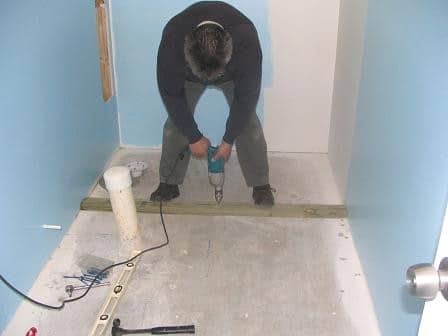 Bags of dry mortar for a tile shower pan bed is mixed in a 5 gallon bucket, then the primary mortar bed is being laid with a trowel and gently sloped for drainage toward the shower drain: 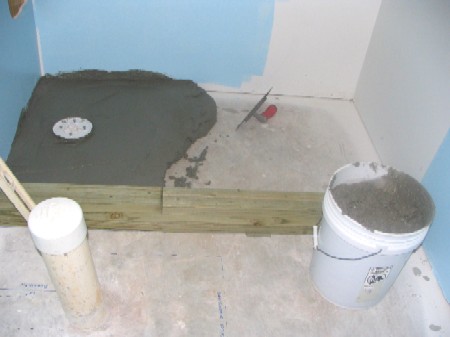 I highly recommend using one of the pre-pitch tools for sloping the shower pan mortar base for a perfect result every time. Also see the Schluter-KERDI-SHOWER-KIT toward the end of this page.

I spoke with several plumbing contractors and most said they skip the pre-slope mortar bed. Rather they install the PVC shower pan liner first and make the mortar bed all at once. Doing so will cause problems with mold and ponding in the permeable mortar because the mortar bed is not waterproof and soaks up water. Something to note if hiring a plumber to build the shower pan.

The pre-sloped primary mortar bed is completed in the following photo: 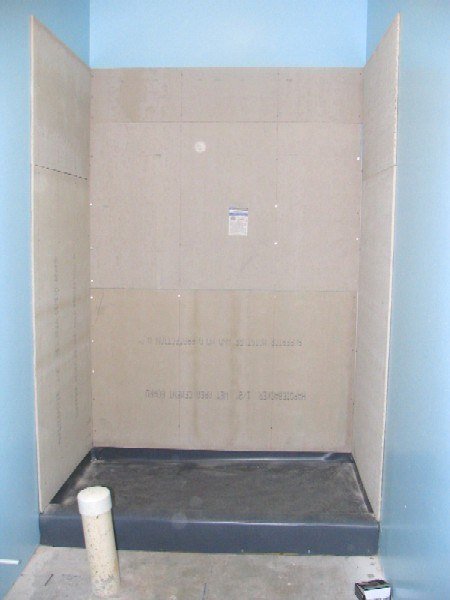 Metal lath is laid over the PVC liner and tacked to the outside of the curb only so the mortar has something to grip. To make the 90 degree bends for the shower curb, I used a 2×4 and block to make a brake (a “brake” in this sense is device for bending metal). This worked very well with crisp perfect bends. 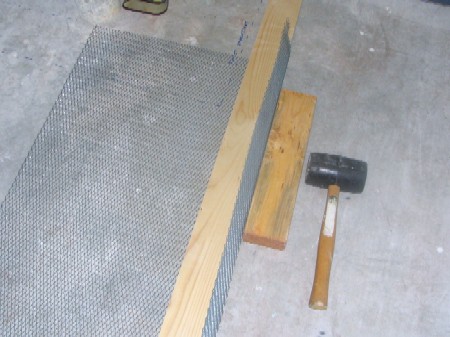 Another 1-1/2 to 2 inches of bedding mortar were troweled onto the shower pan floor with about 3/4 inch thick layer of mortar over the shower curb. The shower pan strainer is covered with blue masking tape to keep out dirt. The final result is in the photo below. Click on the image for a larger view.

The porcelain tile shower plans and materials list are figured in How to Finish a Basement Bathroom – Part 4.